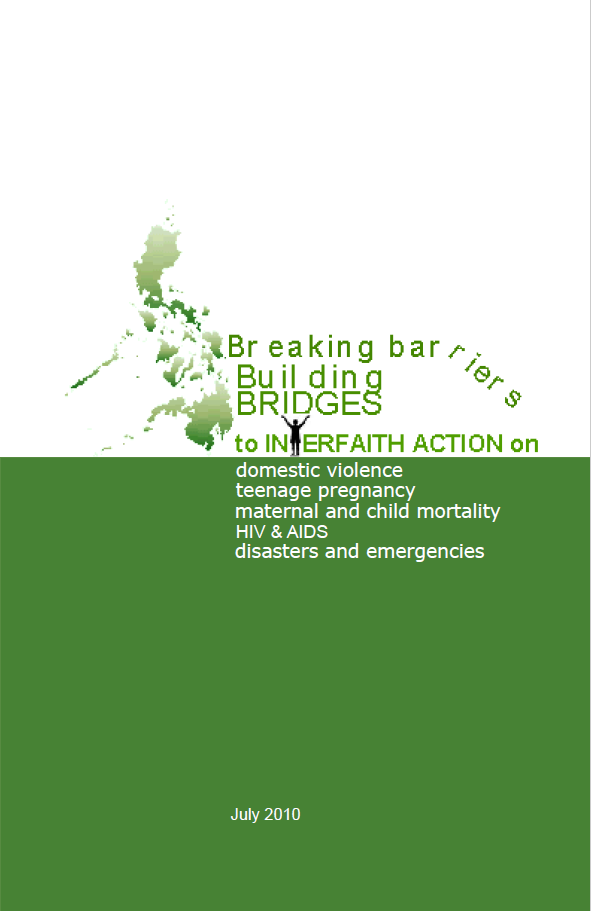 There is no question that Faith-based Organizations in the Philippines or FBOs have had good success in reaching a wide spectrum of Filipinos, including the poorest and those in far-flung areas of the archipelago. But their full potential as development and cultural agents of change remains untapped.

Tapping this potential in addressing population and development concerns, particularly maternal mortality, HIV & AIDS, gender-based violence and humanitarian crises, was the pivot around which ideas were exchanged during the conference, Building an Interfaith Network on Population and Development in the Philippines last April 2 and 3, 2009.

Forty-nine FBOs and other development agencies answered the call of PCPD which hosted the conference at the Asian Institute of Management (AIM) with support from the UN Population Fund (UNFPA).

This essay reflects on the dynamics and lessons from the conference, with the aim of bringing to light some steps that can be taken to propel FBOs as significant players in the area of population and development. It was triggered by the critical but constructive and open exchange of views at the conference as well as by current thinking and literature about paradigms relevant to the issues, the shifts that have been made, and those that need to be made.

Hopefully, this monograph will help pinpoint problem areas in interfaith collaboration as basis for exploring possible solutions. FBOs in the Philippines are mostly Christian, some Muslim and of indigenous groups such as Manobo, T’boli, and Mandaya.

Christian FBOs are predominantly Catholic, followed by Protestant and Evangelical FBOs. This conglomerate reaches about nine of every ten (or 90%) Filipinos. Islamic FBOs on the other hand reach about 8% to 9%.

Clearly, FBOs have a unique and great potential to respond significantly to the most controversial and sensitive issues of our times. They can help stop teen pregnancies — hopefully lessen the number of Filipino girls aged 15 to 19 who have unwanted pregnancies — currently 13 for every hundred.

They can also help address problems related to internal displacement arising from armed conflict — as of July 2009, an estimated 200,000 in Central Mindanao are reportedly affected. Conference participants were of the consensus that FBOs, as individual entities and as a group, need to craft a programmatic response to these issues. The call is for FBOs to reflect on the projected 142 million Filipinos by 2014, the impact of such number on the environment and the country’s resources, and what can be done to better ensure the welfare of the 142 million Filipinos expected barely four years from now.

The big question at the conference was how to nurture a faith-based fellowship and sustain a genuine interfaith dialogue that will arrive at the appropriate response to gender relations, the right to sexual and reproductive health, and related issues.